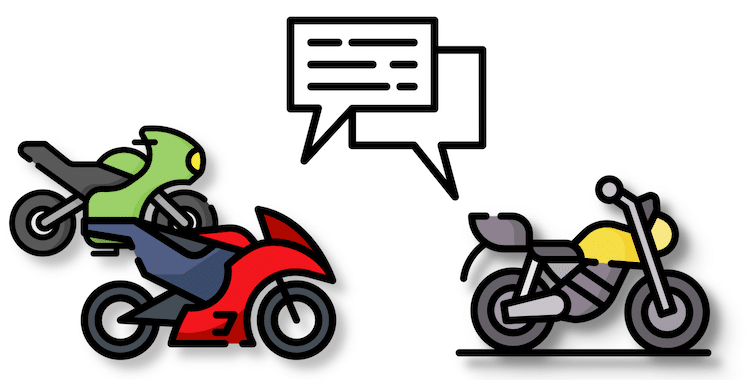 Compatible with every headset

Just use your current headset, it's probably already connected with your mobile phone. Keep using your spoken navigation, listen to music and be able to have an open chat connection with your friends.

We have a balance between high audio quality and data usage.  On top of that we have build-in noise cancellation and auto gain, so all users sound equally loud. Even at higher speeds.

Our server uses the open-source videoconference software Jitsi. It's settings are changed for our needs and require little bandwidth, which keeps the required amount of megabytes per hour minimal.
Video is disabled when you enter in a chatroom, this should keep your data plan from draining when you forget to turn video off.

Use the Mobile (cell) network

Yes, we tried transceivers as well, but their reception isn't good when your are in the mountains or when you are a bit further away from each other.  You will also find moments without cell tower reception in which case the chat doesn't work. The application will  automatically reconnect you when the connection is back.

Jitsi uses DTLS-SRTP encryption for all of it's communication.
1-1 chats are connected directly between phones. Group chats do use our server as central point, but the contents are never stored to any persistent storage and only live in memory while being routed to other participants in the meeting.

Yes. Without any limitations or conditions.  I've been so happy with this solution that I'd like to share it with fellow motorcycle riders. There is no money made or information shared with 3rd parties by selling metadata, conversations, information or anything else. If you like  it, buy me a coffee by making a donation (see Contact). Thanks!

Don't worry when the connection with the server drops. This can happen with bad cell reception.
The application will automatically reconnect and you'll hear a notification sound.

The experience is best  with 15 or less people at the same time. Although we support groups up to 75 people at maximum.

Ready to start a group chat?

The iPhone tutorial is further below.

With many different devices and headsets, it's possible that something doesn't work as expected or that you might have an idea to add to the software. Below are the most common issues and questions. Did you encounter something else?  Send me an e-mail.

First of all: are you sure your headset is connected with your phone?

Other less obvious things to try:

- Start/join a chat in the application. Turn off your headset (disconnect it from your phone) and turn it back on while still inside the chatroom. HelmChat or Jitsi Meet will recognize the change of audio devices and switch to your headset.

- Start/join a chat in the application. Press the 3 vertical dots at the right of the red disconnect button. Select 'Select the sound device' and select your Bluetooth device.

Can you only occasionally hear the other(s)? Can only talk for a short time? Hearing the disconnected sound a lot?

The issue is probably the (lack of) internet connection in your region. Make sure you have 3/4/5G cell coverage in the region where you will drive. And prepare some music for the moments that there is no coverage as there will be some silent moments as well.

If your region has a bad or inconstant 3/4/5G internet connection it might be that Helmchat is not the application you should use. Buy a headset with a decent intercom system is the best optional or use an 'intercom' application on your phone which build up a connection through Bluetooth.

Check the next FAQ item for coverage maps.

There are coverage maps provided by mobile operators. These give you an idea if there is internet in your region.
If you have a coverage map of your country/provider that isn't listed, please send me the link so I can add it here.

One of the many question I received on this subject:

Areas with no mobile signal are a problem as these remote areas are often where the best biking roads are, and where groups of bikers want to ride... (and where we're most likely to get lost!)

Remote locations can indeed be a problem for cell reception. I ride a lot in the Netherlands and it's one of the few countries with cell reception almost everywhere. Unfortunately we lack the more interesting roads.

The problem is that I don't think Bluetooth or WiFi is a solution. In the mountains the range of Bluetooth or WiFi is limited because of the impenetrable rock formations and on open roads the distance between bikers increases as the speed goes up. Cardo headsets for example fix this by using Radio Frequency as well, something a phone cannot do as it does not have the hardware.

I've tried a dedicated WiFi router with a large antenna strapped to a bike. But it can take a really long time before a phone decides to re-connect to the WiFi access-point after it lost connection. Most of the times it was so slow that it just doesn't work well.

Many countries are currently investing in getting data reception in the more rural areas. That will probably help a bit in the next couple of years. Until then even HelmChat won't fix all issues we currently have, so prepare some music for the moments you cannot talk to your friends.

Android limits the volume of the Bluetooth audio to protect for possible hearing damage. It has a side effect  that the audio input volume of your headset might be too low to properly hear the others.

To raise the volume of Bluetooth audio you'll have to enable a setting called Disable absolute volume.  After enabling this setting you will have a separate Bluetooth and device volume slider. Also, any volume limitations will be gone.

Welcome to 2020. Where almost every Bluetooth headset can play high quality lossless audio, but where Google (Android) decided that audio quality to a Bluetooth device should be 16kHz or 8kHz when it's also recording with the Bluetooth microphone. 16kHz is fine for voice audio but is not so great for music.

We build in a fix that could help on some devices, but probably not on newer ones. Start the HelmChat application, open the side menu (3 horizontal lines at the top left), go to Settings, open the Advances Settings menu at the bottom and enable 'Use AudioManager MODE_IN_CALL'.

I have been searching for a solution for many hours, but there seem to be none. I've tested other applications who provide VOIP audio (like Discord for example), but they have the same audio quality which means even they don't have a solution. This might save you time searching for a better alternative.

Need some help or something didn't work?
For questions and support, please use the forums. For everything else send me an e-mail on info@helmchat.eu.

This is a non-profit private project to make group chats a better experience for everyone, but you may always buy me a coffee.

Made possible by Jitsi & FlatIcon

We log as little as possible: rooms that have been created for the last week in order to find out if our server keeps up with the usage and your basic internet and browser information to generate usage statistics of our two websites: helmchat.eu and meet.helmchat.eu.

We rely heavily on the open-source software of Jitsi. We don't think it does, but it could be that they record usage information as well.

Just to be sure: use this at your own risk and we are not responsible for anything regarding our software or service. Drive safe.

My group has been trying everything to communicate to each other during the many years of motorcycle trips. From walkie-talkies with push-to-talk buttons to the so-called 'compatibility' mode between a Sena and Nolan headset and even a portable WiFi router with large antenna taped under the seat with specific software on everyone's his phone. It never worked well.During the Covid-19 pandamic I was working on implementing videoconference software for large teams. I've been playing around with Jitsi on a private server when the idea came to use it with a group of friends during a motorcycle trip.We installed the conference application on our phones, connected to the same conference room and we could talk the entire trip: long distance (overtaking), good audio quality, noise-cancellation for the higher speeds and low cellular data usage.Helmchat.eu (helm is Dutch for helmet) is the tweaked version of this proof-of-concept for everyone to use.